The 2015 Golf Tournament was held at Coyote Creek Golf Club in Morgan Hill, California, on November 12.

Over 72 million children around the world remain unschooled, millions of students do not have access to computers and basic equipment is needed for a proper education.

Camara is an international charity and social enterprise that has decided to do something about this problem. They were founded in 2005 and, have since delivered digital literacy to students in East Africa, the Caribbean, and Ireland. Thanks to Camara’s work, we now have one million digitally literate children, 18,000 trained teachers, 3,300 learning centers, and 66,000 computers in schools. The goal is too have, 2 million digitally literate children by the year 2020!

The way Camara works is that they receive used computers, erase the hard drives, then install a Camara educational package with apps, games, and a lot of educational content for students and teachers to make the computers reusable in classrooms. The computers are then checked, approved, and finally sent to the different schools in Africa, the Caribbean, and Ireland.
Prior to working with Nefab, Camara used to stack the computers and other electronic devices on flat pallets and wrap them with plastic film. These electronic devices were then shipped across the Atlantic to the different locations. The problem was that when the goods finally arrived to the various locations, they were unprotected, missing or would show up damaged. Everyone could see what was being transported, the tough weather conditions also had a big negative impact on the electronic devices. 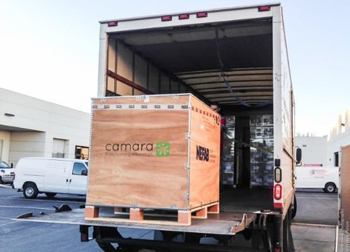 In other words, there was a great need for appropriate packaging. This is where Nefab stepped in with what they do best; providing packaging solutions. With custom made ExPak boxes, the products are protected from the extreme temperatures and moist conditions on the containerships and the risk of theft was reduced.
In order to thank both our California customers and the Camara volunteers, Nefab San Jose, organize's an annual tournament where 100% of the proceeds are directly donated to Camara.

The 2015 Golf Tournament was held at Coyote Creek Golf Club in Morgan Hill, California, on the 12th of November and the total proceeds from the tournament including donations during the day from the players were donated to Camara. In addition to this, Nefab donated $10,000 worth of packaging to be used for transporting the various equipment to the different schools across the world.

To read more about Camara and their organization please click here