Serving more than just our customers

As a global business entity, Nefab realizes the level of care and responsibility it must hold to the world around it. Whether it be in the many local communities we serve around the globe or on a multinational level, these

values are embedded in the work we do and the actions we take on a daily basis. Below are examples of different projects we are working on to contribute to the betterment of the world.

There are hundreds of millions of children around the world that do not go to school, and of those who do, there are still many millions who do not have access to computers and other basic electronic equipment necessary for a proper, modern education. Camara Education is an international charity and social enterprise that has taken it upon themselves to improve this vast insufficiency. Since being founded in 2005, they have delivered digital literacy to students in East Africa, the Caribbean, and Ireland. Thanks to Camara’s work, we now have an additional 2,200,000 digitally literate children, 37,000 trained teachers, 7,000 learning centers, and 100,000 computers in schools. When we began contributing to their organization in 2015, their goal was to have reached 2 million digitally literate children by the year 2020. Clearly this goal has been surpassed years before then, and it has been inspiring to bear witness to and help them get there. Our ultimate aim is to help them continue to reach beyond their goals by contributing with what we know best. 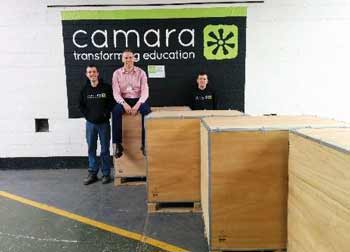 For each computer that is donated to Camara, their volunteers go in to erase the hard drives and install a Camara educational package with apps, games, and many other programs, which fills the computer with educational content for students and teachers to make them fully functional and useful in classrooms around the world.

The computers are then checked, approved, and finally distributed to a number of disadvantaged schools in Africa, the Caribbean, and Ireland.

This is where the tricky part comes in, as shipping goods as sensitive and valuable as computers can lead to a number of issues. Before Camara started working with Nefab to help them in the transportation phase, they stacked their computers and additional electronic devices up on flat pallets and protected them only by wrapping with plastic film. These electronic devices were then shipped across the Atlantic to many different destinations.

One of the main problems that ensued due to this was that the computers were often damaged once they arrived to their final destination. Cargo in sea transport is often subjected to extreme weather conditions over an extended amount of time, which is especially harmful towards electronic components. It was also the case that the loose packaging made mistakes in handling easier, and the full visibility of the computers through the transparent plastic film made them more prone to theft.

In any case, it became clear that there was a great need for a new solution that provided appropriate packaging for these computers, which is where we have stepped in with our expertise. With custom designed ExPak boxes, the computers packed within are protected from the extreme temperatures and moist conditions on the containerships, and the risk of theft and handling damage has been reduced significantly.

In order to thank both our California customers and the Camara volunteers that made our work together possible, Nefab San Jose organizes an annual golf tournament where 100% of the proceeds are directly donated to Camara. It is our hope that through giving back in ways we are able that we can help Camara  continue to make a difference for future generations by improving education standards and digital accessibility around the world.

Get in touch with us!

Since 2013, Nefab has been supporting the World Wildlife Fund with a yearly gift donation to help restoration and safeguarding efforts for forests in Sumatra and Borneo. As a global manufacturer of many different types of wood based products, promoting and supporting responsible harvesting and usage of those resources is extremely important to us. We support and work with suppliers certified by the Forest Stewardship Council (FSC) and The Programme for the Endorsement of Forest Certification (PEFC) to further our commitment to sustaining forest land around the world.

For more information about our work with Camara, WWF, or regarding any efforts with non-profit organizations of our local business units around the world, please feel free to reach out to us using the contact form.