The Convention usually assembles only every five years in the Reichstag Building, the exception being if the Federal President's term of office ends prematurely.
It consists of all Members of the Bundestag and an equal number of members elected by the parliaments of the Länder. This time this have been 1260 members in total.

To be able to fit everyone in the plenary all desks and have been dismounted and replaced. In the past the desks have been packed in bubble foil which was extremely time consuming.

In a public invitation to tender, the Bundestag administration asked for a packaging solution which would allow for faster and easier storage of these desks in the plenary hall. 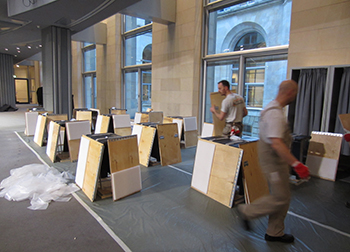 The main criteria were simple, tool-free assembly, space-saving storage of the empty containers as well as adequate product protection. Nefab drew attention to the tender and developed a packaging concept based on our product Expak XL, which fully met the expectations.

In addition to the packaging itself, Nefab supplies transportable and storage containers in which the packagings can be stored until dismantled, safe, space-saving and easy to handle.