We use third party cookies to provide you with the best possible user experience. Cookies store information about how you use our website, which gives us valuable information on how to optimize it with your best interest in mind. If you continue to use our site without changing your settings, we assume that you are fine with our cookies and the way we use them.

The number of electric vehicles on our roads is growing rapidly. For the emergency services, rescue operators, garages, and operators in the waste industry, the rising number of large and powerful batteries is a cause for concern. In addition to electric vehicles, there are numerous other applications where powerful Lithium-ion batteries are used to power airplanes, machines, and tools, facing the same challenges.

An electric vehicle's integrated lithium-ion battery can pose a considerable threat especially if the battery is damaged as the result of an accident. The threat can continue over the course of several days or even weeks.

Until now, the emergency services arriving on the scene of a crash or accident have had no alternative to prevent this thermal runaway other than to submerge the vehicle in a container filled with water. This is often done even as a “preventive measure”, causing huge damages to the vehicle itself.

In addition to immense damage there is two additional challenges: Firstly, once the car has been recovered from the container, tens of thousands of litres of water from the container have had to be treated as contaminated waste, requiring specialist - and costly – treatment. Secondly, a battery that was not unstable before being submerged into water, after it has been recovered it will most certainly be severely damaged. 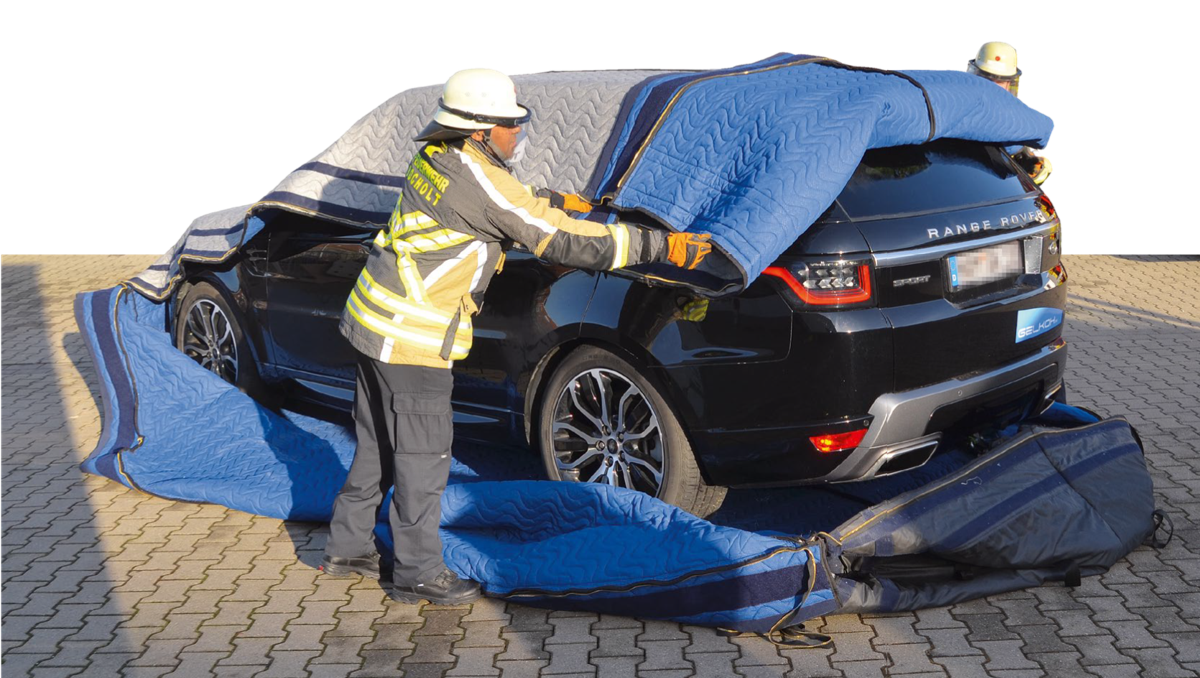 The German company GelKoh GmbH, a specialist manufacturer of UN-approved dangerous goods packaging solutions and safe workplace systems for lithium-ion batteries, has extended its strategic partnership with NEFAB Packaging UK to now include the LiBa Rescue safety system. "The LiBa Rescue offers a much more environmentally friendly and safe way to treat damaged electric vehicles and their batteries. Using the LiBa Rescue, the damaged vehicle is packed into a thermally stable, high-performance safety system, which offers a continuous use from transportation away from the crash site to a quarantine location and onwards to its final destinations such as garages for repair or dismantling of the vehicle. This gives all involved experts the time they require to analyse the status of the battery properly.

Two operators can secure one vehicle in as little as three minutes until the car is completely safe and the risk of fire is averted. The car first needs to be rolled or lifted on to the bottom part of the LiBa Rescue. Additional lengths are then attached and secured in a patented design, creating a high-tech, non-conductive safety solution. The woven material is 'self-extinguishing', meaning that if a fire should break out inside the battery, the heat emitted from the fire will release gases from the material that extinguish the fire. This provides a safe and stable environment for the whole vehicle even during transport. The LiBa Rescue provides a passive gas-management system whereby highly toxic hydroflouric acid (a critical element of the harmful gases emitted by a lithium-ion battery on thermal runaway) is neutralised as it passes through the system. Finally, the bottom layer of the LiBa Rescue is manufactured with a ceramic lining which will prevent fuel from a hybrid vehicle entering the soil or surface water and damaging aquatic biospheres.

Even the risk of an explosion has been considered during the design process of the LiBa Rescue. The material has a very high permeability, allowing large amounts of gases to pass through the material. This means that in the event of an explosion, gases will pass through the system without damaging or ripping it open. The membrane is strong enough to withstand exploding batteries and to prevent any projectiles from escaping.

Because the LiBa Rescue consists of several separate elements, damaged parts can either be repaired or exchanged at a fraction of the cost of an entirely new system. This appeal to insurers who are currently facing high costs associated with electric vehicles involved in serious accidents. Fire fighters will also value the fact that the system does not require any water - water isn't always readily available at crash sites, something which currently causes logistical problems at the site of an accident.

GelKoh’s engineers have spent three years developing the LiBa Rescue and the product is now being launched on the market in 2021. LiBa Rescue is available in one standard size: 'SUV', adding additional segments to it, the system can be extended to be used for vans.